This is a brief technical essay for editors. Writers are free to listen in.

Why do we argue, er, debate, er, discuss commas so often? Why do we mostly all agree about one comma and have widely divergent views about another comma? (Okay, there are only three possible views for any given comma: needed, forbidden, and optional; so maybe “widely divergent” is the wrong formulation.) Why do editors insist on the rightness of their view?

Relax. There’s room for more than one approach, and readers adapt smoothly and without confusion. You will be a better editor if you acknowledge that there are different ways to approach comma usage that are equally valid.

Consider: We understand that the ur-comma was a breath mark, pure and simple. It was an aid to the lector, when few were literate and reading was done from the pulpit. But also remember that some modern writing is meant to be read aloud, whether to children or to a theater audience or at a poetry slam.

So that’s one axis: Do you use commas strictly analytically (following formal rules), or do you use them to guide the reader in the intended prosody of the sentence? Obviously, you want to have one consistent approach in a given text, and if you only ever edit that same kind of text (academic work in the humanities, say), then you will always use the same approach. But other kinds of texts may benefit from using a different approach.

I’ve taken a stab (based on pure guesswork, mind you) at placing various sorts of prose on this plane I’ve defined. You might place them differently or think of better examples, and that’s fine. 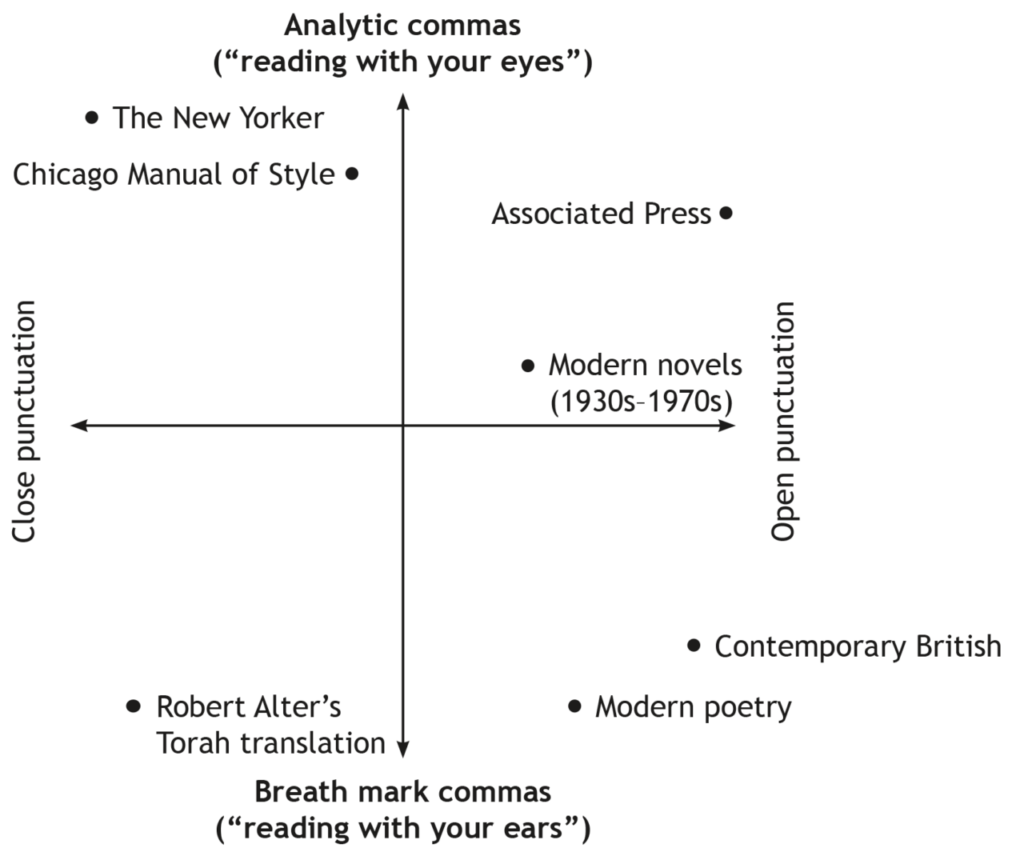 My main point is that all of these exist in the world, and chaos has not ensued. So saying, as some editors are wont, that style guide A or style guide B is the gospel handed down from above and all other possible approaches are wrong does not seem productive to me.

What makes sense to me is to realize that all of these styles are valid in specific contexts and that to the extent an editor can let go of the idea that one style is better than another in some absolute sense and can instead embrace the idea of choosing a punctuation style that suits the text at hand, that person becomes a better, more versatile editor.

We can still use analysis to describe the reason for using or omitting a particular comma, but we can do it in the context of understanding the range of possible styles.